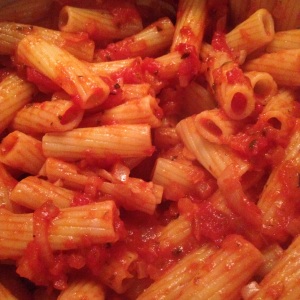 We’re counting down the sleeps to school now, and going to bed early again after two weeks (really feels like two years) of late nights, parties and plenty of excitement. So today was a day of rest until my little one reminded me that she needed new shoes.  So we braved the shops this afternoon and managed to accessorise the new shoes with a hat, gloves, coat, sweater and t-shirt… So several hours later, we headed home a bit to close to tea time… I hadn’t planned tea, nor considered what we might have in the fridge!  But with a trusty stock pile of pasta in the cupboard, I ended up doing a simple tomato pasta.

In the time it takes to boil some water in the pan and cook the pasta, this one is ready!  And it’s generally a crowd-pleaser, especially topped with plenty of grated cheese…

1 tin plum tomatoes (or chopped, but I believe you get more tomato for your money with plum, which is probably untrue and more likely to be because my mum always bought plum tomatoes an possibly believed the same thing)

1. Bring a large pan of water to the boil.

2. Heat a tbsp olive oil in a separate pan on the hob.  Chop the onions and garlic and soften in the pan for around 10 minutes.

3.  Add the pasta to the boiling water with a good pinch of sea salt.  Stir so it doesn’t stick and cook for the recommended time (usually 7-12 mins depending on the pasta)

4. Add the plum tomatoes to the onions & garlic with a good pinch of salt & pepper, and a teaspoon of maple syrup.  Use a wooden spoon to break down the tomatoes.  Bring to a gentle simmer and allow to reduce slightly while the pasta cooks, remove from the heat if the sauce becomes too dry and add a little water if necessary.

5. Drain the pasta once it’s cooked, return to the pan and stir through the sauce.

*You know by now that I choose organic ingredients as far as possible… and I read something by Jamie Oliver today which summed up why really nicely… He said:

“Let me clarify – organic food is natural food, where nature has been allowed to do its thing, and I’m sure most of us will agree that putting natural ingredients into our bodies is only going to be a positive thing.”

Jamie can divide opinion I know, but I don’t think this statement can really be argued with?  And I am so all for positive actions!